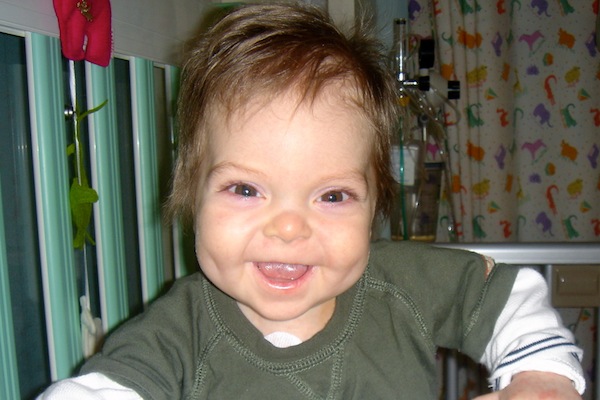 Tyler was diagnosed with infant acute lymphoblastic leukemia (ALL) when he was less than one month old. His prognosis was very poor from the outset, and yet we had the incredible fortune of knowing him for 23 months. Tyler was, indeed, a gift and an inspiration.

His smile was ever present, and in spite of the challenges he faced—a bone marrow transplant at five months of age, two bouts of sepsis that sent him to the ICU for a month each, two relapses and two rounds of intensive reinduction therapy, and finally, a fungal infection that spread from his lungs to his brain, to which he ultimately succumbed—Tyler was an incredibly happy baby and toddler. He spent his life in hospital in Tokyo, Japan, but it was all he knew. And, like all children, he lived in the moment and so even the hospital became a joyful place for him.

It is Tyler’s smile that remains in the heart of everyone who was lucky enough to meet him, and it is his smile that ultimately led us to create the Tyler Foundation—now, Shine On! Kids.

From Kim, his Mom 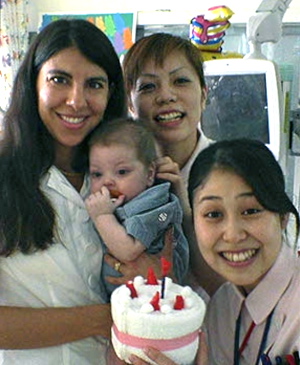 Tyler was a gift.

He was light and laughter.

He reminded us of the wisdom and joy of children, that is only possessed by the innocent and those living immersed in the present.

Tyler did suffer. He experienced more physical suffering in two years than most people will ever bear in a lifetime.

But if it were suffering that defined Tyler, it would be very difficult to gather you all here to remember him.

In fact, Tyler embodied the complete opposite of what many imagine comes with being hospitalized for two years and fighting cancer.

He was not miserable, grumpy, and whiny—like most children. He was not weak and pathetic. And except for last week (when most of us couldn’t stop crying) no one would look at him and fill with tears of pity.

with a smile that could just knock your socks off.

I’m sure Tyler would be quite cross with me if I didn’t share with you some of the simple lessons he taught me. These are all things that a 40-year-old woman should have embraced without having had a Tyler to set her straight, or remind her of what’s important … Anyway, Ty-chan, the baby, became Tyler-sensei, and here is just a fraction of what I’ve learned—or what I’d lost track of, and found again, thanks to Tyler.

If I were given the chance to erase the past two years – the worrying, the exhaustion of going to the hospital day after day, emailing doctors around the world seeking more treatment options when there were none, staying up half the night reading research papers on leukemia and bone marrow transplants, the complete disruption of our lives—I wouldn’t. Spending one afternoon walking through Kinuta Park with our sweet, smiling Tyler, swinging on the swings, pointing to the birds, watching the splashes at the big fountain … God, it was worth it!

Corollary #1: Be as happy as you can be where you are right now.

Tyler was transferred by ambulance to the ICU of the National Center for Child Health and Development when he was less than a month old. Our doctor said that IF Tyler survived the next three days (which in itself was doubtful) he would have to be hospitalized for nine months to a year…well that turned into nearly two years. Even in a bright, cheerful hospital like Tyler’s, how could a baby be happy surrounded, not by family and the cozy comforts of home, but by nurses and doctors and beeping machines and tentekis—IV drips—and yucky orange medicine twice a day?

Running up and down the ward waving to the doctors and nurses, waiting at the door to the ward for lunch and dinner and bouncing up and down and pointing when the big cart of food arrives, looking out the eighth floor window and pointing down to the street, yelling “CAH, CAH!” at each car and bus that passes by … every simple thing was a joy for him.

Corollary #2: Prepare for the future, but live in the present.

You know how when you read the possible side effects on a package of cold medicine…and you think, “yeah, yeah…those things only happen to 0.001% of the people who take that medicine.” Well, Tyler was always the 0.001%. Nothing went smoothly for Tyler—infections sent him to the ICU on a respirator three times in 14 months. Always the nurses were saying, “Mata, chotto yama ga aru, desu ne…” “Mata, Ty-chan, ganbarunakucha.” The Sound of Music was one of my favorite CDs to play for Tyler … his doctor even joked that Tyler had taken the lyrics to “Climb Every Mountain” a bit too literally.

To intellectually grasp the medical challenges that Tyler faced at any point during the past two years was simply overwhelming. I think it was natural that I look ahead five steps, thinking “OK, we can solve this immediate problem, but THEN what do we do?” However, that thinking wasn’t very helpful, because Tyler inevitably had a stash of surprises up his sleeve—bad ones and good ones. The only solution was to be there WITH Tyler. In Tyler’s innocence, the future was barely existent. He was so in the moment that my negativity and fears about what might or could happen next were largely washed away. Tyler gave you no choice but to rejoice in the present and take things one gentle step at a time.

Everyone who ever saw Tyler first thing in the morning in the hospital probably holds the same image in their mind: Tyler crawling over to the side of his bed, standing up, whooping and bouncing and bursting with happiness that you had come to see him. Was he angry that you had left him alone last night in the hospital, while you slept under your soft duvet at home? Was he resentful that you weren’t there at 7:00 a.m. to feed him breakfast? Was he jealous that you snuggled with his older sister in bed this morning?

Not for a second. For Tyler, each morning was a new day to celebrate with a clean slate, a sweet smile, and a big hug.

Lesson #3: Be grateful … and then, be more grateful

For the first year of Tyler’s illness, I was focused on curing him. If he could only be cured, and live a semi-normal life, well, I would be eternally grateful to the universe.

Then, last September, when his leukemia relapsed after his bone marrow transplant, his statistical chances for cure dropped from around 30% to less than 10%. I felt betrayed. How could we have gone through a year of treatment, and now be told it was basically for nothing?

It was then, that I learned what being grateful meant.

You want to run away when you know the person you love so completely, unconditionally, so purely, is probably going to die. The thought of how much it will hurt to lose them makes you want to distance yourself, protect yourself … but how could I run away from Tyler? From September 2004, until the end of April 2005—for nine months, except for a few weeks of intense chemotherapy in between—Tyler was well. He was at home five nights out of seven, he was in the park, watching the trains go by at Komaba-todaimae station, playing with his sister, and eating udon by the fistful.

Last September, Dr. Shioda, one of the oncologists on Tyler’s team of doctors, held my hands, looked into my eyes, and told me that Tyler would almost surely die. But, she said, the next few months would be a very, very special time for Tyler and me. How right she was. What a gift. What a precious, perfect gift.

From Mark, his Dad 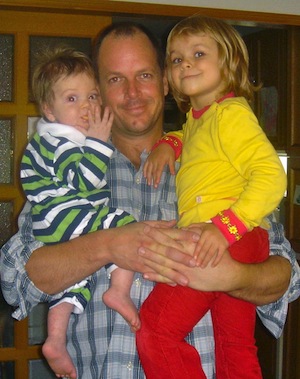 Hey, Baby Tyler! It’s around about now we should hone your ball-throwing technique. We should get your legs sturdy so you can chase your sister around the house. Your Mom and Dad would like to take you on trains and planes so you can watch the world whiz by. Tyler, I was looking forward to taking you to playschool and watching you make friends (and even enemies). I was looking forward to buying you presents and visiting new places to play and ingest the world around us. I was waiting to take you to a rugby game (or a soccer game if you preferred), to Africa to see the animals in the wild and to introduce you one by one to your adoring relatives around the globe. I was looking forward to learning some more songs together and finding where our tastes in music converged. I wanted to watch Natalie play with you, encourage you to do naughty things, inspire you, and be inspired by you. I was looking forward to intermediating the inevitable sibling disputes that would occur as you established your territory in this household and beyond. How proud I would have been to see you graduate and chalk up a slew of accomplishments in the fields in which you participated. I wanted to share a beer with you, play golf around the world and discuss at length that most thorny of topics: women! Most of all Tyler, I wanted you to be proud of your Dad. I have so much I want to tell you and teach you.

In fact, Tyler, I find it is YOU that has taught me stuff. I am humbled by the impact you have had this past two years. First you revealed the importance of our friends: people who showed their concern in all kinds of ways. From hospital visits to put you to sleep to just listening to our constant attempts to make sense of the situation. A continuing diatribe on white blood cell counts, prednisone, neutrophyls, lymphocytes, plasma, platelets, tacrolimus, minimum residual disease, perfusion, coagulation, relapse, bone marrow transplants, cord blood, remission, catheters, etc.

And you showed me that our geographically dispersed family could offer great comfort in their very different ways. This ranged from Grandma’s touching “take me, save him” plea to Don’s heroic all-nighters at the hospital and effortless entertainment of the nurses.

You taught me another dimension of perseverance and determination. However many drugs you were given, even when dehydrated and food deprived, even when cooped up in the “clean room,” you were grateful for what you had and this translated into the mercurial smiles that we cherish now.

You taught me a new perspective on Japan. The diligence and care with which your doctors and nurses approached the issues at hand was inspiring to say the least. I cannot imagine a better standard of care anywhere.

You taught me to be grateful for your big sister. And then there’s your Mom!!! Wow! When I first met her in 1993, I wrote a letter saying she was uniquely talented, attractive, sexy, desirable, and great fun to be around. I had no idea that she could rise to the challenges presented to her these past two years. And maintain a positive outlook. And find time for Natalie and me. And hold our family together.

At this point, I find myself wondering whether I’d rather have you tearing around the house now while being oblivious to all these important lessons. I suspect I would … but that would be to ignore another principal lesson you taught us. Life goes on. We need to pick up and move on without resentment and self-pity—just like you did so, so many times.

I will try to take these lessons and apply them in my life. Thank you, Tyler. I love you, Tyler.